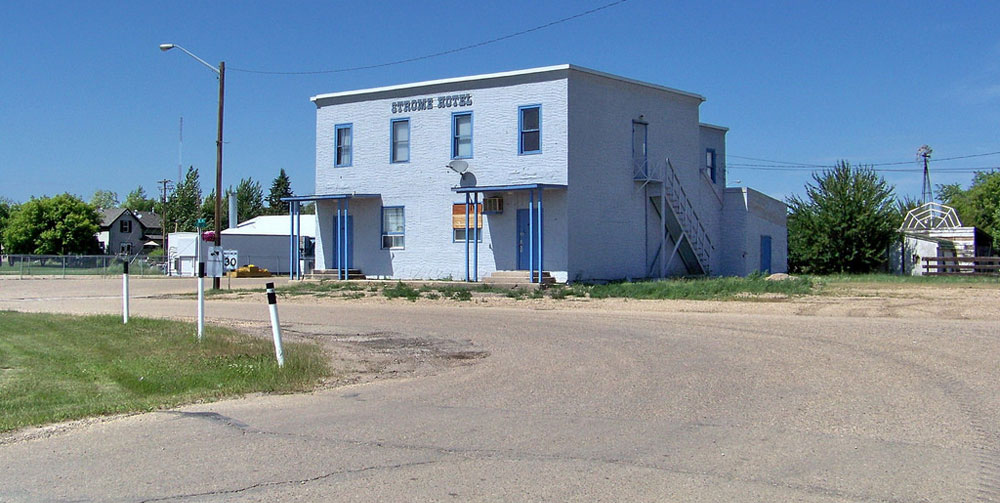 Strome became a hamlet of Flagstaff County on December 31, 2015. Visit the Hamlet section of this website for more information about Strome.

Strome is a small but active community situated on Highway 13 that provides services to the hamlet residents and to the rural residents in the large surrounding farming area.

Excellent recreational facilities abound in Strome, include a two-sheet curling rink, outdoor skating rink, baseball diamonds, a playground and a community hall. These facilities are available for use for a variety of functions and events for groups and families alike. The Strome Drop-In Centre on Main Street is a favourite seniors’ meeting place well utilized for celebrations, card parties, floor curling, lunches, and pot-luck gatherings.

When visiting Strome, you are encouraged to make time to stop in at the Sodbuster’s Archives and Museum to “relive the memories.” Thanks to the residents and pioneer spirit of Strome’s residents, it is one of the best museums in the area. Just north of Strome is Wavy Lake, a favourite feeding stop for geese and ducks and a choice area for hunters in the fall.

A brief introduction to the history of Strome

In 1902, settlers headed west on the railway looking for free land. Our history book makes the point that the early settlers had to be non-conformists to brave the cold, isolation, separation from family, friends, and the drudgery. They thrilled to the challenge of developing a new country “surrounded by friends and good neighbours” and cherishing the land their parents chose, wanting it to “pass on to those who will follow, with faith in God and optimism for the future”.

In 1905, the town site was developed with Strome becoming a successful centre serving the farming community with a restaurant and first hardware store set up in a tent. In the fall of 1905, Max Knoll opened the first post office under the name of Knollton and set up the first general store. The name of the first Post Office was changed to “Strome” on July 1, 1906. The hotel, another hardware store, and churches followed. Strome became an incorporated Village on February 3, 1910. By 1911, Strome was one of the most prosperous towns along the line. The farmers looked on Strome as, “the town where they received a fair deal, when other places nearer the packing plant could not or would not pay the prices given here”.

Strome was always active in recreation. Sports were keenly followed, with special sports days and all kinds of tournaments. The business people would host free events on these days. There were tennis courts, skating and curling rinks, basketball and so on. The Memorial Hall was built as a social centre for picture shows, dances and other gatherings. Strome boasted the best dance floor in any small town in Alberta. The Old Timers recall the spirit of the early settlers and the willingness to go to any length to entertain themselves. The people entertained royally. Picnics at Wavy Lake were common, advertising everybody welcome, sports and games for all, Band in attendance. Races were always part of the picnics.

Trees along Main Street were planted in remembrance of the war ending. The school kids did the planting and carried the water to them.  Bowery dances were held in Strome with the dance floor built in the spring and lined with trees. The dances were enjoyed by young and old alike.  Bands of natives would arrive in Strome in the spring and hire out to local farmers. One year, when they were finished with their brush cutting jobs, they came into town, camped and built a dance bowery, inviting the townspeople to their pow wow. Another year, Dr. Carmichael raced a 70-year-old native named Steinhaurer down Main Street. Steinhaurer won hands down. When people got together in their school districts for community activities they held concerts, dances, box socials, and card parties. The whole family would come, even the tiny babies. Strome was very good at hosting inter-generational activities – and still is!

In 2010, the Village of Strome celebrated its 100th birthday! A committee of volunteers was formed. They raised money, applied for grants, and organized a whole weekend of activities. The result was a huge success, something that Strome residents will remember for many years to come.

A video production called “100 Years on the Prairies, Featuring Strome & District” was produced and sold after the Celebrations weekend. The video includes interviews of local residents, past residents who had come for the celebrations, and videos of all the weekend activities.

Back to Community Guide