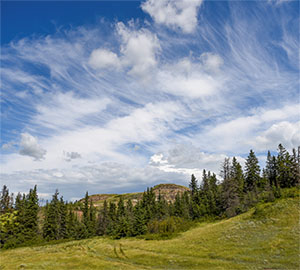 Flagstaff County and the Nature Conservancy of Canada (NCC) are proud to announce a partnership dedicated towards conserving the Meyers property, an ecologically significant piece of land along the Battle River.

This project is of particular importance as it represents the first time NCC and Flagstaff County have partnered to conserve a property owned by the municipality.

“The Meyers property is a unique natural landscape that we felt should be protected from development,” says Flagstaff County’s Reeve Gerald Kuefler. “Council sought alternatives for how we could protect it. Through our research, we determined that that Nature Conservancy of Canada would be the best option.”

The Meyers property is 169 acres (68 hectares) located on the banks of the Battle River, which is a tributary of the North Saskatchewan River that runs through central Alberta and western Saskatchewan. The lands surrounding the river make up the Battle River watershed.

The Battle River is a prairie-fed river instead of a glacier-fed river; it depends on local rainfall for its water supply, making the lands that surround it critical to its survival. The watershed—or basin—is an important geographical feature, as snow and rain that falls on the surrounding lands all drain into the river.

The preservation of vegetation in riverside areas, called riparian zones, is important because it stabilizes the riverbanks and prevents erosion, decreases the impact of flooding, and filters out sediments and pollutants. It also provides habitat for native fish, birds, mammals, and insects. A few significant fish species found in the Battle River include northern pike, walleye, mooneye, and goldeye.

Water from the Battle River is used by downstream communities every day for domestic, industrial, and agricultural purposes.

The Meyers property was purchased by Flagstaff County in April 2012. Due to its location alongside the river and the lack of human impact on the land, the county recognized the need for conservation of the property and approached NCC, Canada’s leading land trust organization, about placing a conservation easement on it.

A conservation easement is a solution for landowners who still want to retain ownership of their property, but are invested in long-term conservation. An easement is the legal transfer of select development rights to a land trust organization. It is a legally binding contract recognized by both provincial and federal law, and the easement remains in place even if ownership of the land changes in the future.

Bob Demulder, NCC’s regional vice president, said “the Meyers property is excellent natural habitat containing a mosaic of grasslands, badlands, and woodlands. Partnering with Flagstaff County is a unique opportunity, and the Nature Conservancy of Canada is pleased to be a part of this exciting conservation project.

Heading forward, Flagstaff County will continue to manage the land. Reeve Kuefler says the plan is to maintain the property’s uniqueness by keeping it in its natural state. NCC will visit the property annually to ensure the terms of the easement are being upheld, and together, NCC and Flagstaff County will work together for the long-term conservation of the Meyers property.

Photos of the property available here (photo credit to NCC).

-The Meyers property, combined with an adjacent 1,200-acre (486-hectare) easement also held by NCC, creates several miles of conserved riparian lands along the river valley of the Battle River.

-This conservation project was made possible with the support of Flagstaff County towards both the securement of the easement and the stewardship of the property.

About the Nature Conservancy of Canada

The Nature Conservancy of Canada is the nation’s leading private, not-for-profit land conservation organization, protecting vital natural areas and the species they sustain. Since 1962, NCC and its partners have helped protect more than 2.8 million acres (1.1 million hectares), coast to coast. In Alberta, we have conserved over 234,000 acres (94,700 hectares) of this province’s most ecologically significant land and water.

Flagstaff County is known as the “Community of Communities.” Ten communities located within create a region that boasts an affordable cost of living, numerous recreational opportunities, friendly people and a quiet rural lifestyle.