The soil environment is a very complex place where many types of organisms live. There are protozoans, bacteria, nematode and fungi. Some are very useful to crop production. One of the most interesting ones, in my mind, is the arbuscular mycorrhizal fungi, or AM fungi, for short. They aid plants in obtaining soil nutrients and work as an extended root system. Everyone knows about rhizobium bacteria that work with pulses to obtain nitrogen. AM fungi can do much more than that. 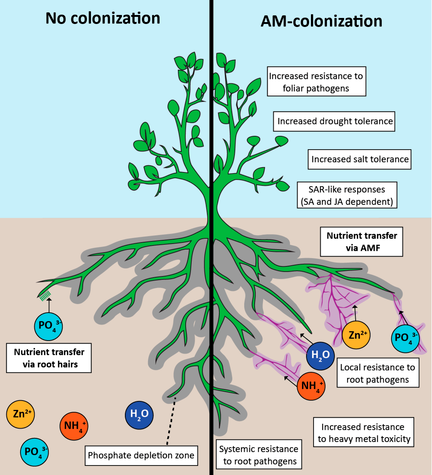 These fungi work symbiotically with plant roots. They are fed by the plant and, in return, help the plant access phosphorus, nitrogen, sulfur and calcium as well as micronutrients. The fungal hyphae have a higher surface-to-volume ratio than plant roots, increasing the absorptive ability for nutrients. The fungal hyphae are up to six times more efficient than plant roots at accessing soil phosphorus. Some pea growers I know do not use any fertilizer phosphorus because AM fungi provide most of the phosphorus the peas need. As fungi, the spores tend to germinate more frequently in the presence of host plant roots and invade the root cells. About 80% of all plants have some strain of AM fungi they can work with. They especially work well with pulses such as peas, lentils and faba beans.

Another benefit of AM fungi is that they increase the plant’s ability to withstand stresses, both from disease and competition with other plants and from environmental challenges. This has been seen in improved salt and drought tolerance.

However, members of the mustard family, and that includes canola, cabbage and cauliflower, do no establish AM fungi in their roots and do not benefit from the increased ability to access nutrients. Other agricultural activities that prevent or suppress the formation of the AM fungi partnership include tillage, use of fungicides, heavy fertilizer use, and a limited crop rotation. Some crops, like flax, are very dependent on AM fungi for phosphorus uptake. Tillage disrupts the hyphal network and reduces the fungal ability to provide nutrients to the plant.

They have been able to measure how much carbon the fungi receive from the plant, as well as the amount of phosphorus the plant gets from the fungi. Plants can provide up to 30% of their photosynthetic carbon to the fungal hyphae and, in return, get up to 80% of their required phosphorus and nitrogen from the fungus.

AM fungi become less common and diverse as soil nutrients and moisture levels increase, probably due to the plant not needing the services of the fungi as much. Some of the soil components that help give soil good structure come from these fungi. Using cover crops increase the mycorrhizal fungi colonization of the soil. It also provides for rapid spring colonization and early season root colonization, leading to early spring phosphorus availability and improved crop yields.

AM fungi can be a useful ally in crop production. However, it does require some changes in crop rotation and limited cultivation. It is another useful tool in crop production and should not be overlooked. Below are three videos on these fungi.