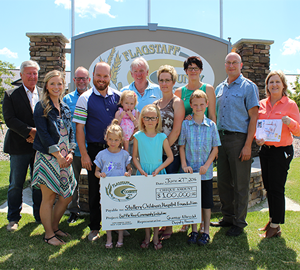 Flagstaff County is donating $100,000 to the Stollery Children’s Hospital Foundation.

“The Stollery Children’s Hospital cares for kids in communities throughout Alberta and across Western Canada, and that’s why we are so incredibly thankful and proud of the fundraising our friends in Battle River are doing in support of kids and youth who rely on the expert care that only the Stollery can provide,” says Mike House, President and CEO of the Stollery Children’s Hospital Foundation. “This amazing gift from Flagstaff County will help build one of five new pediatric operating room suites at the Stollery and means more kids will get the compassionate, expert care they deserve when they journey through this newly expanded OR.”

Operating room space has been identified as a critical need at the hospital that is positioned as a western Canadian hub for pediatric cardiac surgery and organ transplants, serving one of the largest catchment areas in the world. Demand for OR space outstrips capacity, according to the latest statistics from the hospital, leading to waitlists and cancellations of critical surgeries and procedures for children and youth. 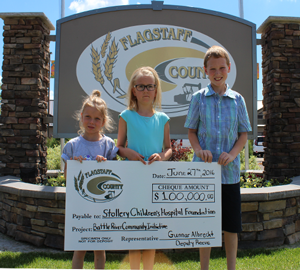 “Many families in our region have benefited from the high quality care offered at the Stollery Children’s Hospital,” says Flagstaff County Deputy Reeve Gunnar Albrecht. “We’re happy to be partnering with the Battle River Community Initiative to help ensure that high quality care continues.”

Among the many families in Flagstaff County that rely on the Stollery are the Thompsons. Owen Thompson, now 10 years old, was born with a rare disorder known as gastroschisis in which the bowels develop on the outside of the body due to a hole in the abdominal wall. In Owen’s case, his bowels had also twisted, which was causing internal damage. So on his first day in the world, Owen underwent surgery. He was left with 35 cm of bowel; the typical length for a newborn is 265 cm.

Owen spent roughly half of the first six years of his life at the Stollery. He has 14 scars on his torso, including scars from two open heart surgeries for an unrelated condition. He is fed intravenously – something that won’t change for the rest of his life. But Owen, a student at Central High Sedgewick Public School, shows no outward signs of his long medical journey. He’s just an energetic and happy youngster.

“It means the world to us because it feels so personal,” she explains. “We shared Owen’s story and it’s like they really heard us and felt for us and Owen. The County has always been very supportive of Owen’s situation and this really just shows what solid community support and spirit we have. It’s really very heartwarming and means so much.”

“This donation means the world to me,” she says. “We have been in the unfortunate circumstance of needing the Stollery for long periods of time. As so many other families we know, this is an investment in taking care of our children.”

Brett Denham, of Camrose, was one of several Battle River Community Initiative committee members on hand for the cheque presentation this week at the Flagstaff County Administration Building. His six-year-old daughter Macy spent the first five months of her life at the Stollery, during which time she underwent three surgeries.

“The generous donation Flagstaff County made to the Stollery Battle River Initiative shows their vision and commitment to the health of the children in the Battle River region,” he says.

The donation will be funded from Flagstaff County’s Special Projects reserves.

To date, the Battle River Community Initiative has raised $450,000. Committee members are looking to raise just $50,000 more by the end of the year to reach their goal of $500,000. To support this initiative, donate online at www.stollerykids.com, call 1-877-393-1411 or mail a cheque to: Stollery Children’s Foundation; 800 College Plaza; 8215 112 St., Edmonton, AB; T6G 2C8. Select “Battle River Community Initiative” when donating online, or reference it when calling or mailing in your donation.