A herd of hungry goats – 150 in all – is working to purge an infestation of leafy spurge from a quarter-section of Flagstaff County-owned land.

The four-legged, bearded weedeaters have been grazing through the noxious weed in a fenced area just southeast of Hardisty from 8 a.m. to 9 p.m. every day since May 22.

Devouring the flower of the invasive vegetation, the goats have cleared about 10 acres so far, the goats’ owner Darci Penner estimates.

“It’s going well,” Darci notes. “It’s taken them a little while to develop a taste for leafy spurge. Once they figured it out, that’s what they prefer and that’s mostly what they’re picking off.”

Darci, who farms with husband Michael in the area of Mallaig, Alta., has been contracted by Flagstaff County to oversee the innovative program that offers a natural alternative to spraying chemical herbicides. In fact, spraying isn’t an option for a portion of the area. The Battle River meanders through the southeastern tip of the property and spraying is restricted along the river banks. The rough terrain in one particular part of the quarter-section also presents challenges for machinery and vehicle access. 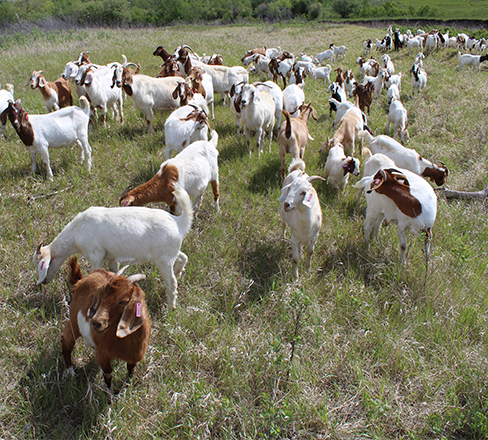 Besides being environmentally friendly and easily manoeuvrable, goats have proven to be cost-effective and efficient in dealing with leafy spurge in this spot in recent years and through other jurisdictions as far back as the mid-1980s. Due to the extensive root system of leafy spurge, herbicide management programs are typically extensive and costly. In particularly large infestations, herbicidal management costs may even exceed the value of the land. Goats, meanwhile, feed on the noxious leafy spurge flower clusters, which contain seeds that the weed would normally jettison up to 15 feet. Goats fully digest these seeds, not allowing them to spread in their droppings and germinate.

Darci’s domestic herbivores – which range in age from one to six years old and include doelings, nannies and wethers – are slated to keep chowing down on the secluded area of County land until the first week of August.

“We’re going to try to get done what we can in the time we’re allotted,” adds Darci, a member of the Alberta Goat Association with husband Michael.

A Maremma sheepdog is watching over the goats and keeping vigilant for predators, such as coyotes, as the goats stick to a rotational grazing schedule behind a portable electric fence.

Plans are in place to continue the program, initially conducted at the site in 2013 and 2014, annually. The area is expected to be essentially free of leafy spurge within five to six years. 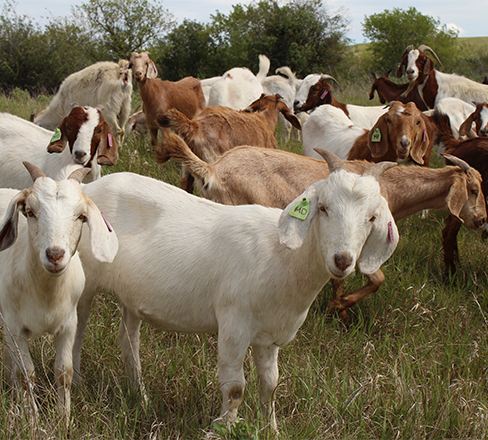