Leafy spurge has been “bugging” Wyatt and Theresa Bitzer for years.

This summer, the Hardisty-area farmers are finally turning the proverbial tables on the persistent perennial weed – by unleashing 4,000 flea beetles on a patch of their infested land.

The tiny black beetles, referred to scientifically as aphthona lacertosa, are known to have a voracious appetite for leafy spurge.

It’s all part of a new program that Flagstaff County is offering to residents in partnership with the Alberta Invasive Species Council.

The idea is that these little weed warriors will munch on a small area of leafy spurge (typically about three square metres) over the next few months.

The beetles will lay eggs in the soil soon and eventually die, while the larvae will bury into the roots of the invasive vegetation and overwinter in the root system, explains Karma Tiberg, a biological control specialist contracted by the Alberta Invasive Species Council to assist with beetle releases at two properties in the Flagstaff Region. 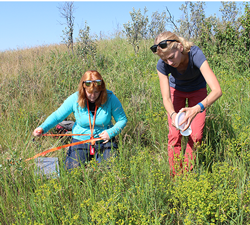 “And then next summer, they’ll emerge as adults,” she adds. “It’s one generation per year.”

This type of beetle is inherently lazy and rarely flies, according to Tiberg. Rather, it hops. And as long as there’s leafy spurge around, it will stay put.

The hope, of course, is that the flea beetle population will increase from year to year, which will increase the patch size of leafy spurge that’s impacted.

The Bitzers likely won’t notice a difference for several years.

“You’re not going to see a lot of damage until they build up their populations,” Tiberg notes. “It’s not an overnight solution by any means. It’s more to bring it back into balance. It’s not going to eradicate the weed completely, but it’s going to bring it down to a manageable level.”

That’s fine with the Bitzers. They’re just happy to have a green alternative. 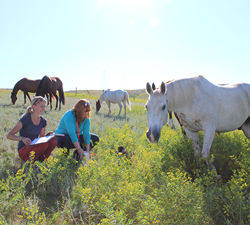 The couple moved onto the property, located just southeast of Hardisty, circa 2000. Since then, their leafy spurge problem has gotten progressively worse.

“They worked well,” Theresa says, “but we don’t have the fencing to keep them in.”

Now they’re hoping the low-maintenance beetles will prove effective over the long haul, in addition to the targeted tilling and mowing they do on a regular basis.

“I don’t think you can control it with one method. It takes a multiple, diligent effort,” she adds, noting they don’t spray. “We understand the (leafy spurge) situation is what it is. We just want to make sure we stay on top of it. Hopefully the bugs will work out.”

All of the insects were harvested in Pincher Creek.

How well they’ll do in Flagstaff County is difficult to say, Tiberg acknowledges.

“It’s site-specific and it all depends on winter, how many overwinter,” she explains. “We’ll find that out next year when we come back to monitor.”

Flagstaff County offered a similar program roughly two decades ago, but it was discontinued.

For the past nine years, Tiberg has witnessed the evolution of the Alberta Invasive Species Council’s leafy spurge-flea beetle program. (She started with the program in 2007 as a summer student; since 2012, she’s been running it.) Over that time, the major enhancement has been establishing a local origin for the beetle supply. In the early days, the beetles were harvested in Montana and North Dakota. Nowadays, they’re 100% Alberta beetles. 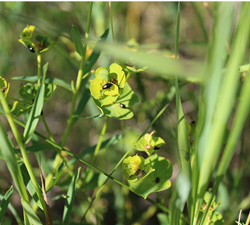 “By using Alberta beetles, they’re already acclimatized to the area and we can get them out sooner. They’re not in storage. They’re not being transported,” explains Tiberg, who works part-time as a research technician with Agriculture and Agri-Food Canada’s Lethbridge Research and Development Centre, where she spends winters testing new bio-control species.

In the case of spraying, Tiberg tells landowners to give the flea beetles a buffer zone of at least 10 metres.

For more information on the use of flea beetles to control leafy spurge, call Flagstaff County’s Agricultural Fieldman Kevin MacDonald at 780-384-4138 or email.