But not to worry. It’s all part of an innovative weed control program that Flagstaff County’s Agricultural Services department is spearheading in partnership with the Alberta Invasive Species Council.

For the second consecutive summer, flea beetles have been unleashed in a patch of leafy spurge on farms owned by Wyatt and Theresa Bitzer, and Steve Mazure.

The tiny black beetles, referred to scientifically as aphthona lacertosa, are known to have a voracious appetite for leafy spurge.

And by all accounts, these little weed warriors are making measurable progress on the Bitzer and Mazure farms.

“You can see they’re doing some damage,” says Flagstaff County weed inspector Jessica Hryciuk, who recently visited the farms with Karma Tiberg, a biological control specialist contracted by the Alberta Invasive Species Council to assist with the beetle releases.

“We found beetles in that bald spot,” notes Tiberg, who works part-time as a research technician with Agriculture and Agri-Food Canada’s Lethbridge Research and Development Centre, where she spends winters testing new bio-control species.

Last summer, Tiberg released 4,000 flea beetles on the Bitzer farm and 2,000 on the Mazure farm.

This year, another 2,000 beetles were released at both sites.

Prior to fall, flea beetles will lay eggs in the soil and eventually die.

The larvae, meanwhile, burrow into the roots of the invasive vegetation and overwinter there – emerging the following summer as adults.

The flea beetle is inherently lazy and rarely flies. Rather, it hops.

And as long as there’s leafy spurge around, it will stay put.

The hope, of course, is that the flea beetle population will increase from year to year, which will increase the patch size of leafy spurge that’s impacted.

Tiberg reports that a significant number of beetles successfully overwintered at both sites.

“The first hurdle is getting them to overwinter,” she explains, noting it will take a few years for the flea beetles to get established and get the upper hand on leafy spurge.

“I’m happy with the results. It’s not an instant-gratification scenario that a lot of people are used to.”

For more information on the use of flea beetles to control leafy spurge, call Flagstaff County’s Agricultural Fieldman Kevin MacDonald at 780-384-4138 or email him at kmacdonald@flagstaff.ab.ca. 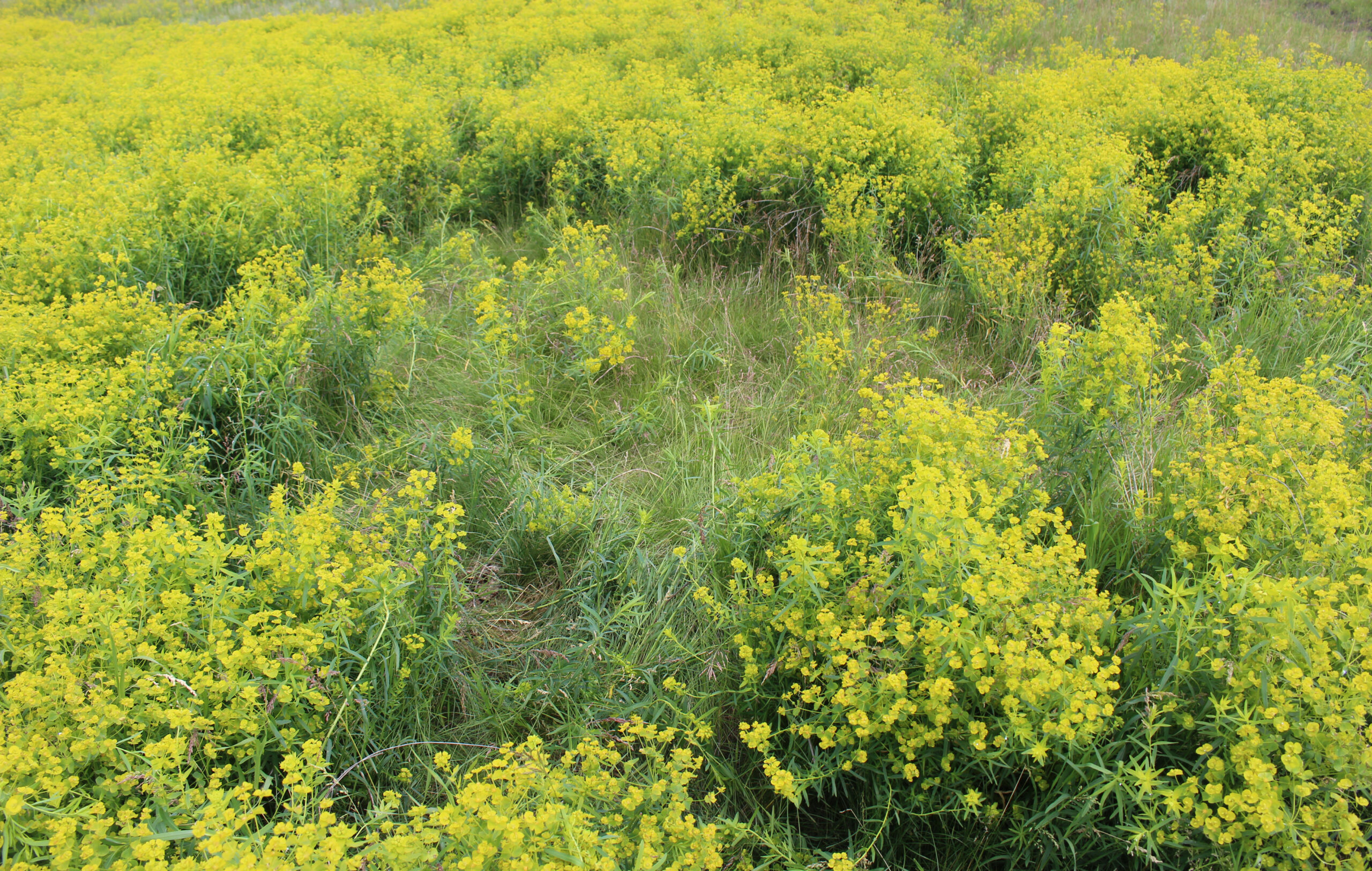 A ‘bald spot’ is visible in a patch of leafy spurge on the Bitzer farm – evidence of the progress made by flea beetles.