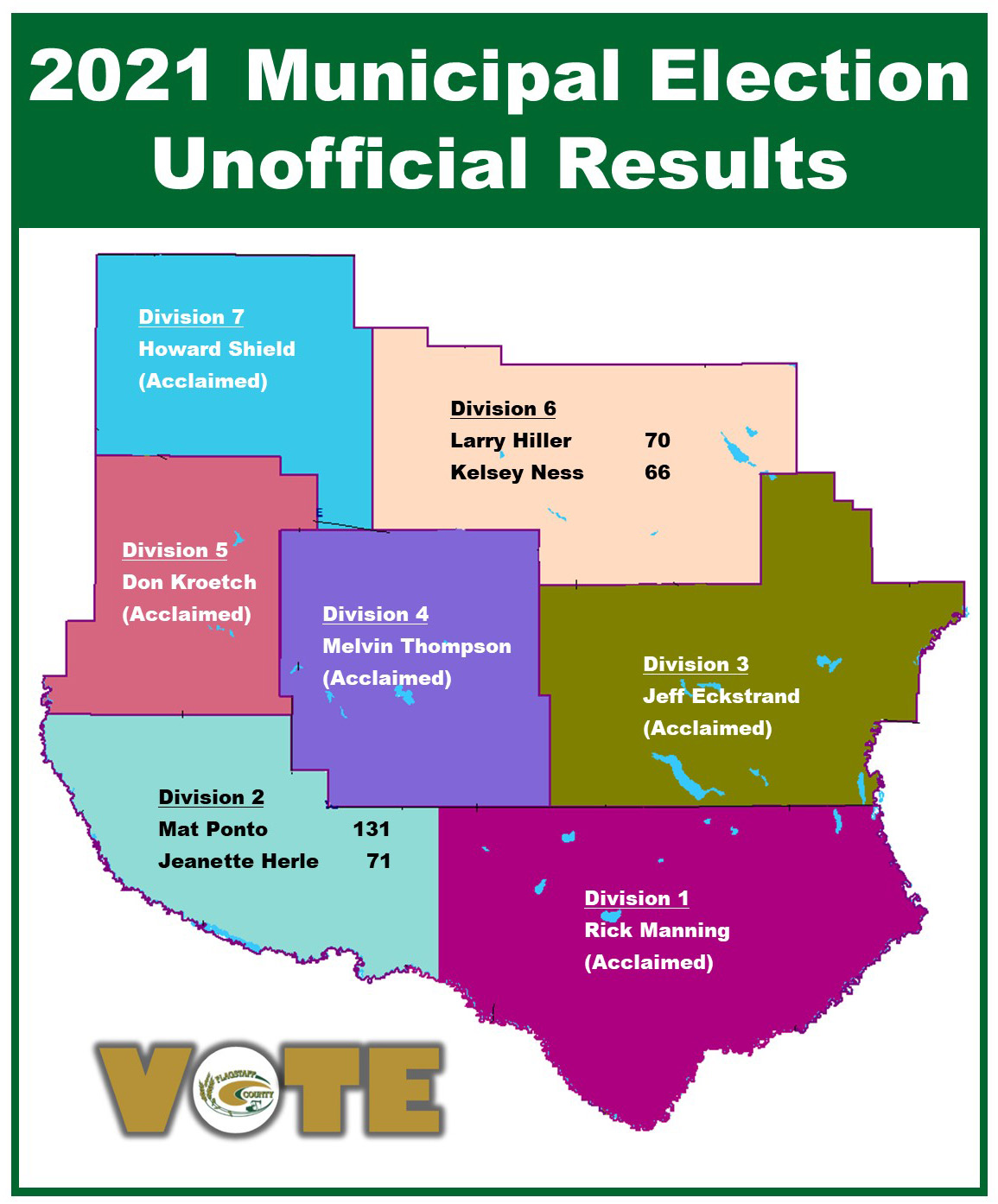 Click HERE for a PDF of the official form. 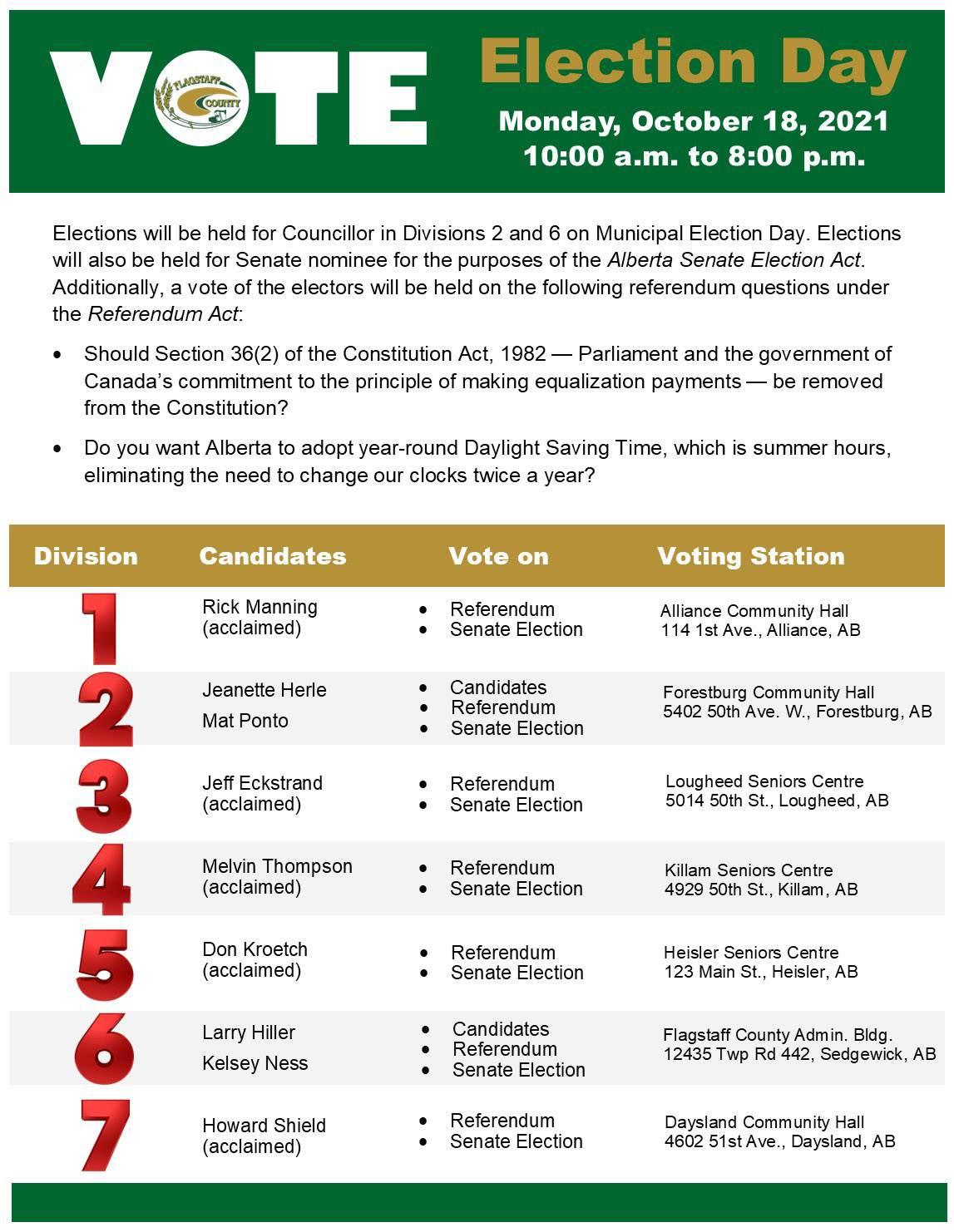 Click HERE for a PDF of the official form.

The following candidates have been declared by acclamation for their respective divisions:

There was one withdrawal from a nominee for Div. #6:

There will be an election in the following two divisions:

Flagstaff County will be providing for Special Ballots in the 2021 Municipal Election. This provision allows voters who cannot or do not wish to vote at a polling station a chance to still vote.

To arrange to pick up a Special Ballot package or have it mailed, or for more information on the process, please contact the Returning Officer via email at returningofficer@flagstaff.ab.ca or call the County Office at 780-384-4100.

Completed Special Ballots must be received by the Returning Officer no later than 8:00 p.m. on Monday, October 18, 2021.

Voters in Flagstaff County and municipalities across Alberta will go to the polls on Monday, October 18, 2021.

For a map of the Electoral Divisions in Flagstaff County, click HERE or on the image below. 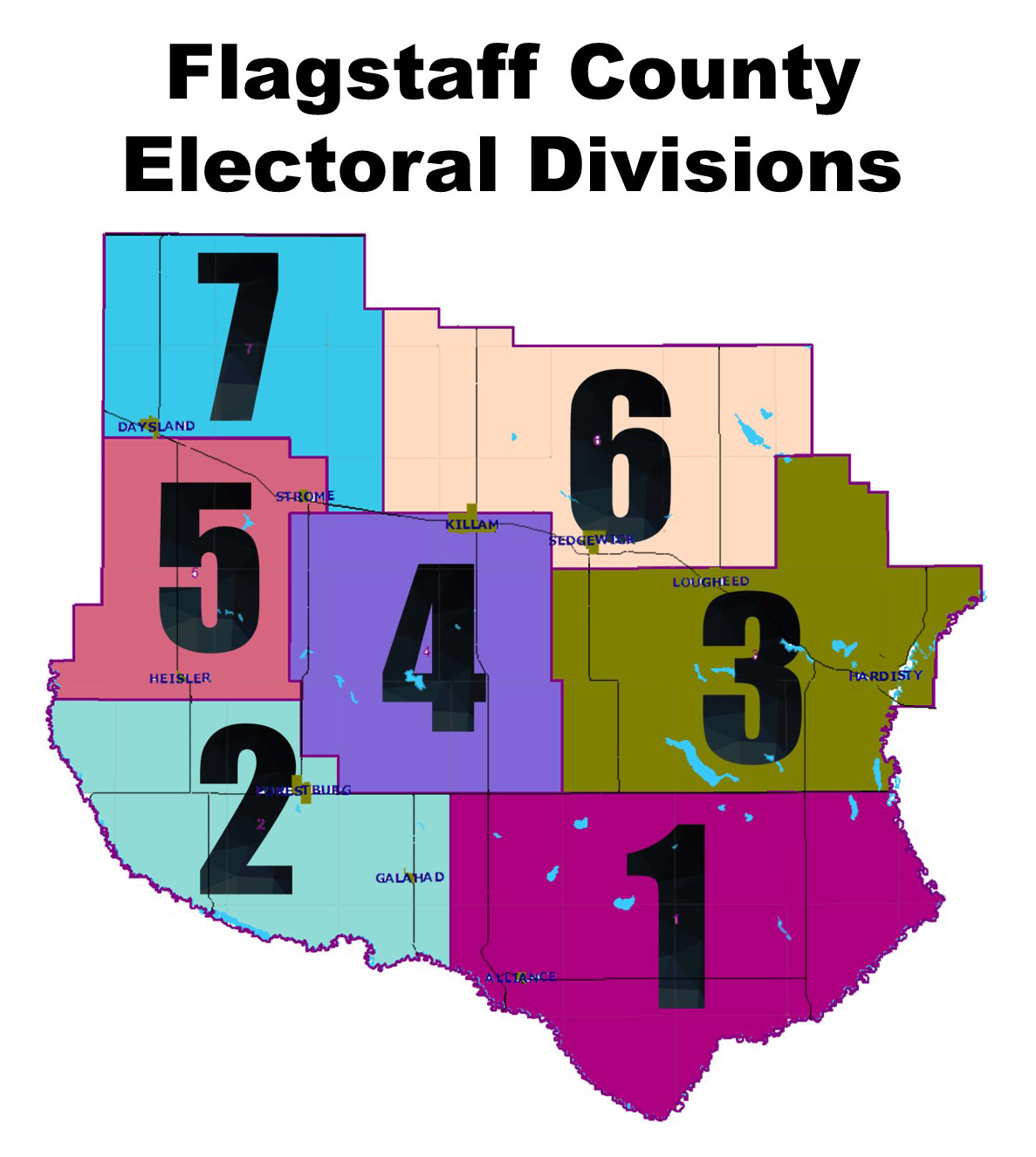 You are eligible to vote if you meet ALL of the following criteria:

All electors are required to show identification, which contains proof of identity and current residence in order to vote.

Nominations for this year’s municipal election are open and will be accepted until noon on Monday, September 20, 2021 (Nomination Day). For more information, click HERE to read “A candidate’s guide: running for municipal office in Alberta.”

It is the candidate’s responsibility to ensure that the Nomination Form is filed in accordance with the Local Authorities Election Act.

The Returning Officer must review and sign the Nomination Form before it can be accepted. Note that the Returning Officer shall not accept a nomination that is not completed in the prescribed form, is not signed by at least the minimum number of required persons, or is not sworn or affirmed by the candidate.

Nomination forms will be accepted by mail or personal delivery to the Flagstaff County Administration Building at P.O. Box 358, Sedgewick, T0B 4C0 or 12435 Twp Rd 442, Sedgewick.

If you wish to submit your Nomination Form in person, please make an appointment with the Returning Officer (Sandy Otto, returningofficer@flagstaff.ab.ca).

The official list of Flagstaff County candidates who have filed their nomination papers to run in the 2021 Municipal Election will be posted as soon as it’s finalized.

You are eligible to run as a candidate if you meet ALL of the following criteria:

You are not eligible to become a candidate under any of the following circumstances:

If you are a judge, Member of Parliament, Senator, or Member of the Legislative Assembly, you must resign that position before you take office as a member of council. If a person failed to comply with the requirements in the LAEA as they relate to campaign finance and disclosure and the secretary (chief administrative officer) transmitted a report in respect to that person, and/or the Court did not dispense with, or extend the time for compliance with respect to campaign finance and disclosure, a person is deemed to be ineligible. A person is deemed to be ineligible under these circumstances for either an eight-year period following the day that a report was transmitted by the secretary, or a three-year period following the day the disclosure statement was filed with the municipality (which ever period expires first).

NOTE: If you are a municipal employee and you wish to run for municipal office, you must take a leave of absence as outlined in the LAEA. You may notify your employer on or after July 1 in the election year (on or after the day council passes a resolution setting Election Day in the case of a byelection) but before the last working day prior to Nomination Day.

If you are a Prospective Candidate looking for information about running for local office, please refer to the following:

If you have additional questions, please contact the Municipal Services Branch of Municipal Affairs at 780-427-2225, toll-free in Alberta by dialing 310-0000 first, and ask to speak with a Municipal Advisor who can assist you with your questions or direct you to the appropriate contact.